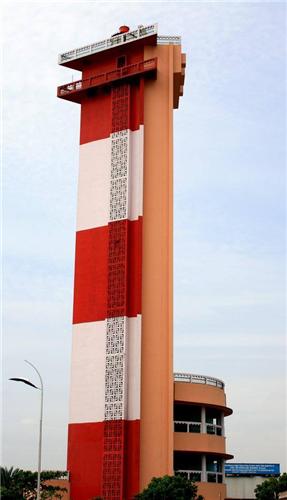 Chennai light house is located on the east coast of Indian Subcontinent and looks towards the Bay of Bengal.
It is one of the renowned attractions located on the well-known beach of Chennai known as the Marina beach.
This lighthouse of Chennai was launched in 1977, January. It also gives shelter to the meteorological department and visitors are not allowed to visit this place.
It is the only lighthouse in India which has an elevator.

At the present time, the Chennai light house is the 4th lighthouse in Chennai.
Before the conclusion of 18th century, when Chennai used to be an open shoreline, goods were stacked and unloaded from ships at this place.
Fisherwomen used to light bonfire in order to lead people in the direction of the sea shore.
The very first traditional lighthouse started off its operation in 1796.
This light acted as a warning signal to avoid the risk of shoals present in the Kovalam (or Covelong) beach in north as well as south. This lighthouse operated till the year 1841.

Description of the Towers of Chennai Lighthouse:

There are 5 towers in Chennai Lighthouse. They are:

The Progress Report of Chennai Lighthouse:

The lighthouse of Chennai is considered to be the one among the 13 lighthouses of India which are famous heritage centers and depict the nautical history of India.
There are also plans to construct rooms, viewer’s gallery, gaming zone, cafeteria, museums, 4D cinema hall, aquarium and a souvenir shop at Chennai lighthouse.

The proposed heritage museum will include the following:

There is also a proposal for the automation of 22 lighthouses in Chennai lighthouse District. All these lighthouses will be examined and regulated from the nearby locations known as RCSs or Remote Control Stations.
All these RCSs would be finally connected to a proposed master control station situated in Chennai.

Location of the Chennai Lighthouse: