Chennai is a beautiful city which is famous for its numerous unique South-Indian festivals. Some of the local festivals in Chennai include Good Friday, Easter, Christmas, Prophet Mohamed’s Birthday, Muharrum, Eid-ul-Zuha, Holi, Diwali, and Navratri.
A few of the prominent festivities that deserve special mentioned have been discussed below. 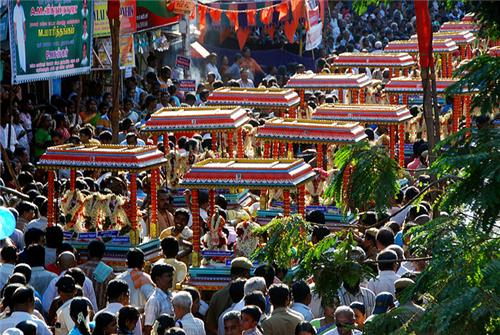 A religious festival that needs special mention is the Arubathimoovar Festival.
The period between March and April fills the air around the Kapaleeswarar Temple in Mylapore with the smell of this festival.

It was during the 8th century that the Pallava kings had built this ancient temple.
For a period of 10 days, the Chittiraj or Brahmothsavam festival is celebrated in temples across Chennai.

Amongst all major festivals that are celebrated for these 10 days, the Arubathimoovar Festival also needs to be mentioned; on the day of this festival all 63 Saivite (Narayanas or Narayanmars) saints would take part in a long processions alongside Lord Shiva.
One of the most famous processions is the one that begins from Kapaliswarar temple in Chennai. All the visitors are delighted to catch a glimpse of the 63 bronze idols of the Nayanmars. 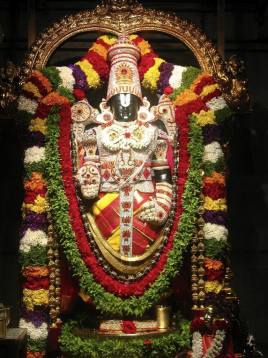 Tirumala Tirupati, Sri Parthasarathy Temple and Sri Ranganatha Temple depicts much of their gusto in celebrating this day as the Vaishnava temples observe the Vaikuntha Ekadasi.
Amid all the pageantry and pomp, the people of Tamil Nadu celebrate this key festival through the phases of ra pathu i.e. 10 days time and pagal pathu which is the 10 days & nights time. (In total, over a period of twenty one days).

Much to the delight of devotees worth hundreds of thousands, Lord Ranganatha arrives at Thirumamani Mandapam leading a grand procession via Parampada Vasal on the day of Ekadesi.
This festival is celebrated both within India and other countries. There’s a legend behind Sri Ranganatha’s acquiring the name of Sri Rangaraja.

It gets late in the night for the procession to return to the temple following a daylong celebration and recitation of Nalayira Dhivyaprabandham. The Pagal pathu urchavan marks the commencement of celebrations and Rapathu urchavan marks its closure.
A Tamil calendar shows you through the Margazhi month which marks the Vaikuntha Ekadesi Festival, one of the prominent local festivities. The Margazhi month constitutes segments of January and December. 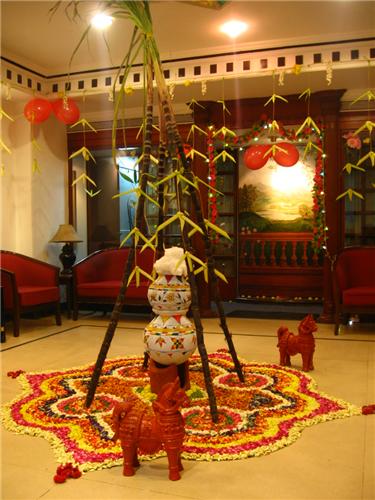 In South India, the harvest season and the monsoon season is assumed to end with the celebrations of Pongal, worshiping the cattle, mother Earth and Sun God is included amongst the different rituals of this festival.
The Tamil month of Thai sees that beginning of this festival which continues for a sacred period 4 days.

Bhogi Pongal is celebrated on the very first day of the festival (January 13th) for cherishing the families; the Sun god is worshiped on the following day known as the Surya Pongal.
Mattu Pongal or the third day celebrations is dedicated towards worshiping the cattle; the final and fourth day known as the ‘Kaanum Pongal’ is meant for visiting relatives and friends.

During the festival of Pongal, the people of Chennai wash and clean their places, decorate and paint the doorways with flower garlands and leaves; a tribute to the Rain god is a must, and is followed by cooking of delicious foods. 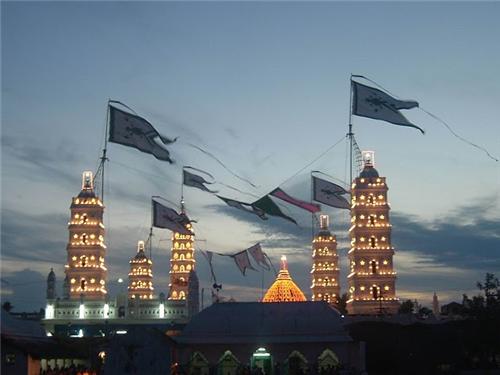 The citizens of Chennai reserve a special place for the Kanturi in their hearts. Tourists from various corners of the world are drawn towards this festival, as the energy of the affair and its grandeur sweeps them off their feet.

The festival is primarily held in Nagore as the devotees flock to the shrine of Saint Qadir-Wali between the months of July and August.
The celebrations would continue for 14 days, when the new peer is chosen from amongst the descendants of the festival. A paste of sandalwood with powers to heal would be shared by the devotees on the auspicious occasion.


Other Important Festivals held in Chennai:

Chennai, the capital city of Tamil Nadu observes the dance and music celebrations between middle of December till middle of January. All major forms of South Indian classical dance and music are performed across different city venues chosen by multiple organizations or sabhas.

Ghatam, Mridangam, Thavii, Nagaswaram, Gottuvadyam, Veena, flute and various other Kannada, Telugu and Tamil instruments play a key role during the performances.
Closing of this season is marked by celebrating the birth of Thayagraja - one of the best Carnatic music maestros.