Situated within the picturesque surroundings of the Marina beach, the MGR Memorial in Chennai is a structure built in the memory of M.G. Ramachandran, the former Chief Minister of Tamil Nadu.
It was inaugurated in 1990 for public viewing by Mrs. Janaki Ramachandran in front of his many well wishers. The memorial is located where M.G. Ramachandran was cremated. It has a Samadhi and a park. 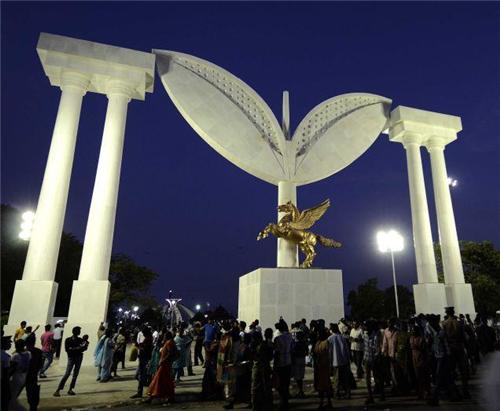 The Man behind the Memorial

The MGR Memorial pays homage to the first Indian matinee idol who went on to become the Chief Minister of a state not for one, but for three consecutive terms. Among his followers who idolized him, he is known as “Puratchi Thalaivar” meaning revolutionary leader.
He was the founder of AIADMK, and the political mentor of Chief Minister J.Jayalalithaa. In 2012, she inaugurated the refurbished MGR Memorial, a project which she personally oversaw and thus paid her tribute to the departed leader.
He was instrumental in popularizing the concept of giving free mid day meals for children in corporation schools. He was awarded the “Bharat Ratna”, the highest civilian award in India posthumously.

History of the MGR Memorial in Chennai

Spread over 8.25 acres, the MGR Memorial in Kamaraj Salai is situated adjacent to the Anna Memorial and has the highest number of visitors along the seafront.
The memorial was first remodelled and opened in 1992, with the whole complex laid out in marble. In 1998, the mausoleum was renovated once again.

The Indian Ocean tsunami in 2004, affected the memorial and repairs were made costing about Rs. 13.3 million. Originally built in 1988, the memorial facade was essentially a tall entry arch greeting with folded hands.
Post renovation of the memorial in 2012, the facade was replaced with a concrete replica of the two-leaf emblem, which is the official symbol of the AIADMK party founded by Dr. Ramachandran.

Architecture of the MGR Memorial in Chennai

In addition to the two-leaf emblem, the facade also received a Grecian touch, with the erection of a 12 feet high, 3.75 tonne bronze sculpture of Pegasus, the mythical winged horse of Greek mythology. The Pegasus has been erected to symbolically denote valour and energy associated with it.
According to Feng Shui practitioners, the Pegasus symbol brings positive energy in its surroundings. R. Ravindran, the sthapathi or scuptor from Mamallapuram creating the Pegasus, reveals the technique that sculpted the horse is similar to the one used for making “panchaloha” idols.
There are a number of exotic plants like alpha, date palm, plumeria, adenium and spider lily thrown in to lend a green, relaxed ambiance. Green is also emphasized by the lush Korean grass with which the open space of MGR memorial has been decorated.
A guitar shaped footpath laid out with granite blocks adds to the artistic touch. In addition, nature also abounds in the form of a fountain artistically placed in the middle of the memorial.  A waterfall behind the mausoleum completes the pure and pristine look. 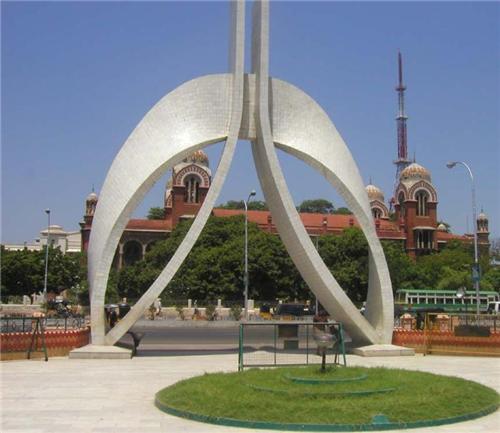 At the entrance and on the arch are overhead tower bearing lights and decorative lamps. There are ramps constructed for the physically challenged.
There are two 15.9 meter high columns built with cement concrete which serve as the entrance. The two-leaves insignia bears a nominal similarity with a honey comb. It is visible from both the front as well as the back side.
The MGR memorial houses a museum at the northern side of its campus. An ever burning lamp inside the memorial stands in the great man’s memory.

Situated in Arcot street, T.Nagar, the MGR Memorial House is the place where M.G. Ramachandran lived for over two decades.  Opened for public viewing, one can immediately spot his dark green coloured car with its number plate still intact.
Music from his film songs plays inside the house. The reception room is decorated with spears, swords, plates, heavy wooden clubs, telephonic instruments and tumblers besides various shields which he got in his lifetime
Visitor Timings
9.30 am – 5.00 pm
There is no entry fee