The OMR or Old Mahabalipuram Road is a stretch of State Highway 49A which originates from Madhya Kailash Temple Junction, Sardar Patel Road, Adyar in south Chennai and moves further south to reach Mahabalipuram at Kanchipuram district and ultimately merges with East Coast Road. 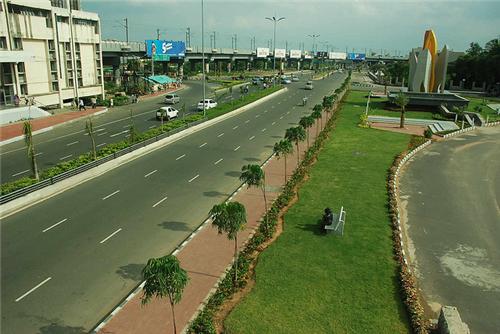 This 45 km. stretch of road bears a particular significance in the perspective of Chennai. This road is now newly named as Rajiv Gandhi Salai which was otherwise popularly known as IT corridor.
Realizing the importance of this road and its impact on local economy the Tamilnadu government came up with ambitious developmental project for infrastructure development.
To plan and execute this developmental program, a special purpose organization was formed by the Tamilnadu government as a wholly owned subsidiary and was named as IT Expressway Limited ( ITEL).
The objective of  ITEL was to complete the dream project which will highlight Chennai to the international business houses as the most acceptable destination in India in terms of facility and infrastructure.

ITEL took up the project of making a six-lane highway in two phases, the first phase was from Kailash Temple to Siruseri where there would be a IT park and the next phase was from Siruseri to Mahabalipuram.
The first phase, stretching 20 km., after much delay has been opened and is fully operational now. Developmental work is going on for Phase - 2.

Besides the above developmental project, The State Industries Promotion Corporation of Tamilnadu Ltd. (SIPCOT) has come up with a Cyber city spanning across 2000 acres in Siruseri.
This strategically located Cyber city with state of the art modern facilities have already found many companies desiring to set up their business operation from there. The cyber city is also operational already.

A maritime university named National maritime University, the first of its kind in India, is also being built in Shollinganallur, The university complex will also house an Aquarium, National Maritime Museum etc.