Different walks of life and sights meet at Chennai, the Gateway to South India. Chennai like most other cities of Tamil Nadu too has a huge number of temples which are renowned all over the country and the world for its architectural brilliance. 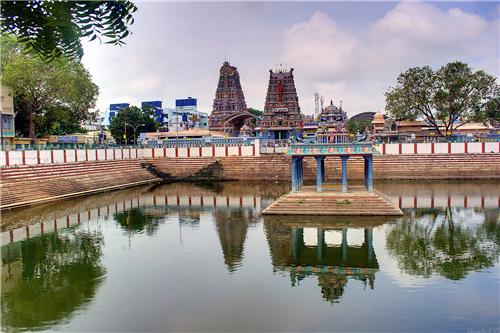 Shri Vadapalani Andavar Temple is one of the major attractions in Vadapalani, Chennai. The temple is the abode of Lord Muruga.

The temple has vast courtyards with a number of Sannidhis e.g. Shanmuga with Devasena and Valli, Kali Bhairava, Meenakshi Amman, Chokkanathar, and Varasiddhi Vinayaka. Skanda Puranam legends are depicted in stucco images adorning a Rajagopuram which crowns the entrance of the temple.

The renovation of this temple was followed by the creation of Rajakopuram in 1920s. This 125-year old temple in Chennai still experiences the marriage of around 7,000 couples every year. The eastern tower is more than 40 meters high; it shows some 108 Bharata Natyam dancing postures.

Adeeswar temple is a Jain temple which is considered to be one of the famous temples in Chennai. It becomes easier for you to keep the humdrum of regular chores away from your sole and body once you pay a visit to the enchanting and spiritual surroundings of this temple.
From Chennai, you’ll need to travel a distance of 9 kilometers to reach this temple. For the Indian Jains, this temple is one of the most important and significant shrines.

The temple is referred to as the Polai Temple, and is known for its sanctity and divinity.
The existence of this temple is backed by a few good legends ever since its foundation was laid in the beginning of the first century BC.
Amongst its many legends, you’ll hear about Valluvar, who resided at Mylapore during the initial years of the first century A.D. The Polai temple was an abode of Adi Bhagwan of whom Valluvar was a constant worshipper and firm believer. 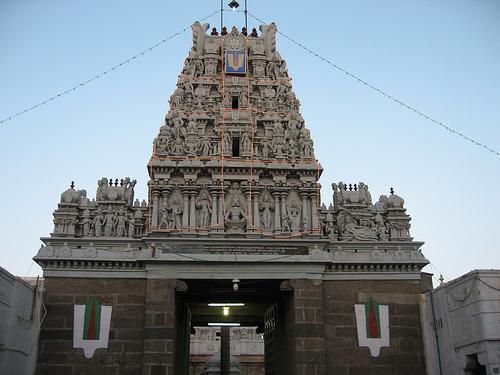 Originally created in the 8th century by the Pallavas, the Parthsarathy temple was renovated around the 15th century by Cholas and then by the Vijaynagara kings.
The Chola period experienced an extensive development of this temple, which was to be followed by numerous inscriptions on it.

Sculptures depicting the various avatars of Lord Vishnu are found within the external mandapam.
The significance of the 8th century is clearly marked in it by the Vijayanagara, Pandiya and Dantivarma Pallava inscriptions.

The 16th century rule of the Vijayanagar kings saw much of this temple’s expansion. It was much later that the pillared pavilions and sub-shrines were created.
Shrines belonging to Vedanthachariar, Swami Manavala Mamunigal, Ramanuja, Alwars, Sri Anjaneya, Sri Andal, Narasimha, Sri Gajendra Varadharaja Swamy, Sri rama, Sri Ranganatha, and Sri Vedhavalli Thayaar are amongst the major attractions.

Amongst the different temples of Lord Ayappan, the temples in Chennai and the Sabari Hills are the most notable ones.
Universal brotherhood and love form the basis of Ayappan philosophy that aims high towards forming an ideal ground for worshiping idols. The popularity and growth of the temple owe a lot to the Sabha’s efforts.

The year 1967 marked the installation ceremony of the Jalahalli Sree Ayyappan Temple. Holy Sabarimala also experienced renovation soon in the hands of their Supreme Priest.

This temple belonging to Lord Shiva is situated in Mylapore, Chennai. Karpagambal is the much worshiped idol of Parvati, the wife of Lord Shiva.
Rare quality Dravidian architecture is reflected in the temple which was built in the 7th century CE.

The peacock form of Lord Shiva illustrated in the Puranas was worshiped by Shakti, his wife.
The area assumes the name Mylai from this incidence, as the peacock is called "Mayil" in Tamil.

According to the Puranas Lord Shiva was once describing the creation of our three lokas to the god of creation, Lord Brahma; however Lord Brahma didn’t seem to agree with him.
Later on, Lord Brahma was forgiven and directed to perform the Mayilai penance. Lord Brahma also succeeded in pursuing Lord Shiva to acquire the title of Kapaleshwarar since the latter used to wear a necklace composed of skulls.

Thiruvanmiyur in Chennai shows you through the Marutheeswarar temple of Lord Shiva, which is quite famous amongst the 275 Paadal Petra Sthalams. This temple bears small shrines for Lord Shiva, Lord Murugan and Lord Ganesha.
Out of these, the shrine for Lord Shiva shows three different forms of idols namely – Lord Nataraja, Lord Marundeeswarar and Lord Theyagaraja. Lord Nataraja depicts the dancing form of Lord Shiva.

It was during the 7th and 8th centuries that the temple was glorified by the Tirugnana Sambandar, Appar and Nayanars (Saints). During the 11th century, the temple experienced vast expansion with the help of the Chola kings. In May 2008, the temple had undergone further renovation.


Some Other Temples in Chennai are: